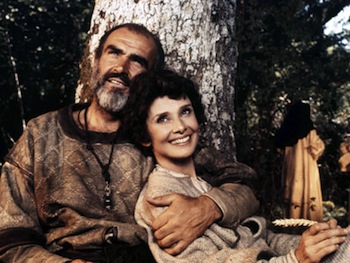 An historical drama released in 1976 starring Sean Connery as Robin Hood, Audrey Hepburn as Maid Marian and Robert Shaw as the Sheriff of Nottingham, with cameos by Richard Harris and Ian Holm. It was directed by Richard Lester with a score by Bond composer John Barry. The script was by James Goldman, who also wrote The Lion in Winter which is set in the same period and features Richard the Lionheart and John Lackland as supporting characters.

An aged Robin Hood and Little John return to England after twenty years fighting abroad under Richard the Lionheart. Robin tries to rekindle his romance with Marian but as the kingdom descends into chaos the people look to Robin to lead a rebellion against King John. Robin is forced to choose between returning to his outlaw ways and retiring to Sherwood with Marian.

Notable for being the only major film about Robin Hood to portray his betrayal and death as found in the medieval ballad tradition. It is also unusual for its portrayal of King Richard as brutal and bloodthirsty, when he usually gains the reputation of a hero against his corrupt brother, who here seems relatively soft by comparison.