Film / Robert Frost: A Lover's Quarrel with the World 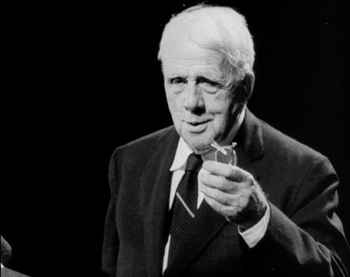 "Never do it to pay a bill, 'cause you probably won't."
— Robert Frost's advice to aspiring poets
Advertisement:

Robert Frost: A Lover's Quarrel with the World is a 1963 documentary feature (barely, 41 minutes) directed by Shirley Clarke.

The film is an examination of Robert Frost, one of America's most famous and beloved poets. Completed shortly before Frost's death at the age of 88, it mostly intercuts between a lecture he gave to students at Sarah Lawrence College and a private reading he gave for students at Amherst. Also included are scenes of Frost at home on his Vermont farm, as well of footage of his meeting with John F. Kennedy, who was a Frost fanboy.