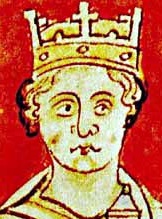 “We owe far more to the vices of John than to the labours of virtuous sovereigns.”
— Winston Churchill
Advertisement:

John, of The House of Plantagenet, was king of England (24 December 1166 – 19 October 1216). Ordinary folks remember him as "Prince" John and as a villain of the Robin Hood stories.

He started his career when he was appointed by his father Henry the Second to rule as Lord of Ireland. Henry had in fact attempted to make John King of Ireland (the previous intended king, Henry's brother, having since died), intending to divide the Angevin possessions between his four sons (John, as the youngest, was not expected to inherit England). However, Henry's quarrels with the Pope prevented this and John had to make do as a mere 'Lord'. He did a bad job (this is putting it very mildly; John certainly wasn't singlehandedly responsible for the roots of the Troubles, but he strengthened and expanded on the existing foundations of what would morph into The Irish Question in a remarkably short time by being a prime irritant in local affairs) and returned to England within a year, having antagonized many and run out of money. He later betrayed his father and joined his brother Richard the Lionheart in his rebellion. When Richard was held captive for 2 years in Austria, John declared himself king. When big brother came back, John begged for his life.

John became rightful king after the death of his brother. John had the brains to be a superb statesman, but a lousy personality: a deficient moral character, his piss-poor ability to lay out long-term plans, and an incredible talent for making bad decisions led to him scoring multiple own goals domestically and abroad. This is reflected in the things for which he tends to be known: his early reign saw the loss of all Angevin holdings in France except his mother's duchy, Aquitaine, earning him the nicknames "Lackland" and "Softsword", and he got into a pissing match with Pope Innocent III over naming the Archbishop of Canterbury that resulted in him being excommunicated and England placed under interdict in 1208, which lasted until 1213 (to which he responded by seizing lands of church members who had fled England or remained loyal to Innocent, no doubt providing Henry VIII with some ideas for later). Despite this, he endeavored to rule as an autocrat, proceeding to extort taxes from the barons and attempted to maximize all sources of income for fruitless campaigns to reconquer Normandy. The defeat of Bouvines was the last straw: barons in turn rebelled and forced John to sign Magna Carta which put limits on his powers and, in consequence, the power of all future English monarchs.

John's extreme unpopularity led to a French prince, Louis — the future King Louis VIII of France — landing in England in 1215

, being proclaimed king in London, and soon controlling over half the country. English history might have taken a very different turn if John hadn't chosen this moment of crisis to kick the bucket. He died of dysentery and most of him was buried in Worcester Cathedral. The monks of Craxton Abbey stole his entrails, making him, in death as in life, gutless. The English barons who were so tired of John shifted their support from Louis to John's nine-year-old son, Henry III, and the Plantagenet dynasty was preserved.

As you might have noticed, he has no number after his name. He's the only John to have ever ruled England. The name is so closely tied with his troubled reign that not a single one of his successors has ever been named or chosen to call himself John. It almost happened, though; his grandson Edward I named his eldest son John, but the boy died young. That said, it is not true that "John" is considered a cursed name for British royals; besides Edward, a few other royals have given the name to their children, albeit admittedly never their senior son and heir.note The most notable of these is George V, who named one of his sons John. Interestingly, this Prince John was, like his ancestor, his parents' fifth son and youngest child, though unlike King John, Prince John was sickly—epileptic, in fact—and died at the age of 13 in 1919.

Tropes associated to his portrayals: