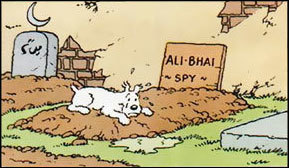 Good dog. Best Friend.
"Don't ask me to leave you and turn back. I will go where you go and live where you live. Your people will be my people, and your God will be my God. Where you die I will die, and there I will be buried."
— Ruth, Ruth 1:16 of The Bible
Advertisement:

A character characterized by their loyalty. Can be a trait of both heroes and villains. Most of them are supporting characters, intended as sympathetic. Indeed, if used on a villain, it can sometimes be used to flesh them out and give them redeeming qualities. Alternatively, it can be negatively portrayed as a threat to conscience.

When given to a main character or one in an authority position, expect it to manifest itself in protective instinct: as a Papa Wolf or The Caretaker or someone who is A Father to His Men. When given to a Sidekick, expect it to be an unselfish willingness to support the main character. It can also be given to friends who, despite their differences, are genuinely fond of the other, and bonus points if it works both ways.

Should the object of this loyalty die, expect generous helpings of Due to the Dead as the loyal one works to honor the fallen one's memory.

See also: My Country, Right or Wrong, My Master, Right or Wrong, Thicker Than Water, I Will Wait for You and I Am Spartacus. An Act of True Love will often be used to prove how loyal one character is to another, by having them perform a great sacrifice to show that they'll put someone else's needs before their own.

Similar to but not to be confused with Blind Obedience, where a character follows unquestioningly believing their liege to be infallible. A loyal character isn't necessarily defined as a perpetual Yes-Man, and may know when to defy or contradict the subject of their devotion, especially if it's as much for their well being as their own. At times this trope might actually come at the expense of those they follow, since they will generally not obey an order that comes at their expense or abandonment. Also, obedience can be demanded and enforced by creating a culture of fear, but loyalty has to be earned through acts of goodwill, and is usually mutual.

Characters that may exhibit this trope: Battle Butler, The Dragon, Happiness in Slavery, The Renfield, The Igor, Loyal Animal Companion, Robot Buddy, Sarcastic Devotee, Psycho Supporter, Extreme Doormat, Worthy Opponent, The Champion, Sidekick, Yes-Man, Sycophantic Servant and most of the characters on the Submissive Badass index.

Remy Remington is close enough to Cricket to the point he never betrays him once; so when Cricket accuses Remy of signing Chip Whistler's destruction petition, Remy claims he never signed any petition and hasn't even heard of Chip.

Remy Remington is close enough to Cricket to the point he never betrays him once; so when Cricket accuses Remy of signing Chip Whistler's destruction petition, Remy claims he never signed any petition and hasn't even heard of Chip.