Manhwa / The Bride of the Water God 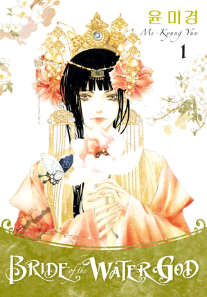 The Bride of the Water God (하백의 신부) is an ongoing sunjeong manhwa by Yun Mi-Kyung, detailing the story of So-ah, a girl unfortunate enough to be beautiful, she is sacrificed to the river god so that the long drought plaguing her village will end. But instead of drowning, Soah finds herself inexplicably alive and brought to the palace of the child-like river god Habaek as his bride. As So-ah adjusts to living among gods, she struggles to learn more about the aloof Habaek and finds it increasingly hard to find somebody to trust in her new world. During all of this, she finds herself falling in love with Habaek's handsome and mysterious 'cousin' Mui, while uncovering the truth behind the yearly sacrifice.

The English version is published by Dark Horse Comics.

It was loosely adapted into a 2017 series, The Bride of Habaek.