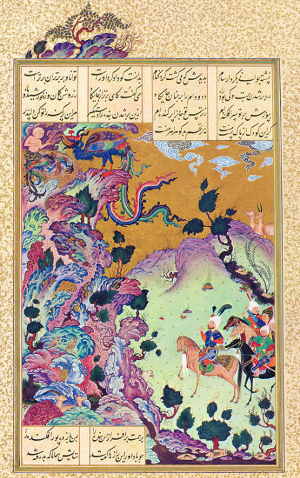 But all this world is like a tale we hear —
Men's evil, and their glory, disappear.
Advertisement:

The Shahnameh is a 50,000 verse epic poem written by the Persian poet Ferdowsi

, started in 977 and finished in 1010. Its name translates as Book of Kings, and that's basically what it is: A recounting of the Persian kings from the creation of the world to the Arab conquest. Most of these kings are mythical, though. The closer the narrative gets to the time of Ferdowsi's writing, the more historically accurate it becomes.

Ferdowsi made a point of writing his poem in Persian when most literature at the time was in Arabic. He also refused to adapt the pre-Islamic legends to accommodate Muslim beliefs. The popularity of The Shahnameh pretty much revived the Persian language, and it continues to be revered as a classic of Persian literature.

The Shahnameh is Older Than Print, having been written a few centuries before the printing press. However, since a good chunk of it comes from Sassanid-period historiographies (224-651 CE), many episodes of the work are probably Older Than Feudalism, at least in outline.

Such is the passing that you must leave,
All men must die, and it is vain to grieve.