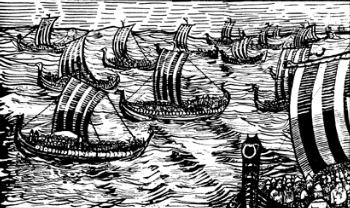 Christian Krohg: "King Olaf's wedding journey to Land's End" (1899)
“A king shall stand for his country’s honour and glory, but not for long life.”
—King Magnus Barelegs, Heimskringla
Advertisement:

Heimskringla is a massive medieval history book, recounting the lives of the kings of Norway from the days when the Aesir dwelt among men to 1177 AD. It was written c. 1230 AD in Iceland, purportedly by the most famous medieval Icelandic author, Snorri Sturluson.

In Asia, east of the Black Sea, lies the city of Asgard, home of the Aesir people and ruled by Odin, a near-invincible warlord. But when the Romans start to conquer Asia, Odin uses his soothsaying skills and foresees that his destiny lies in the North. With many of his people, he emigrates from Asgard to carve out a new empire in the Northlands, and finally settle down in Sweden. When Odin dies, his kingdom is inherited by Njord, then by Freyr, also called Yngvi, and afterwards by Yngvi-Freyr’s descendants, the Ynglings. For twenty generations they rule Sweden, while their people worships the Aesir as gods.

But the Ynglings of Sweden come to an end through their descent into tyranny and kin-slaying, and only an exiled prince, Olaf the Tree-Feller, escapes westward, becoming the ancestor of a line of Norwegian petty kings that eventually spawns Harald Finehair, the man who unites Norway under his iron fist – for the love of a woman. But Harald has many sons, and it will take five generations, a hundred years of fighting and kin-slaying, and the coming of a new faith before the Norwegians learn to stand together and realize who their true enemy is: Those meddling Danes.

Heimskringla is the single most famous work of the Icelandic Kings’ Sagas. The title is an artifact: It was formed in 1697 from the first two words of what was, at the time, the only manuscript in existence: “kringla heimsins”, meaning “the disk of the earth”.note Some editions have preferred more descriptive titles like The Lives of the Norse Kings, History of the Kings of Norway, Chronicle of the Kings of Norway etc. The book consists of seventeen individual sagas, but it is internally consistent and forms a continuous narrative.

As there are very few sources on the history of Norway before it started to develop its own literature from the mid-12th century onwards, the Kings’ Sagas and especially Heimskringla for centuries formed the chief authority on Norwegian history of the The Viking Age and the following 150-odd years after the Conversion. Only in the early 20th century, historians have acknowledged the artificial dimension of the sagas, and have come to see them as a mixture of fact and fiction rather, influenced by the time they were written in. From a modern perspective, it is, rather than a chronicle, a narrative moving from pseudohistory through historical fiction to history. Of course, at the time the book was written, there existed no formal distinction between these genres, as in Old Norse, saga can mean "history" as much as "story".

The climax and centrepiece of Heimskringla — making up a third of the whole book — is the saga of Saint Olaf, otherwise known as Olaf Haraldsson "the Stout", who, as the central figure of the Conversion, and supposedly restitutor of Harald Finehair’s kingdom, was by the 13th century considered Norway’s patron saint and national hero. Other high points that stand out and are sometimes published separately are the sagas of Olaf Tryggvason, Saint Olaf’s spiritual predecessor, and Harald Hardrada, whose ambitions to subdue England ended sordidly in 1066 on the battlefield of Stamford Bridge in Yorkshire.

Heimskringla ends rather abruptly in 1177, when a young King Magnus Erlingsson triumphed over the rebellious Birkebeinar (“Birchlegs”); this could be mere coincidence, but it is quite likely that Heimskringla was consciously devised as a prequel to Sverrir's Saga, which begins just where Heimskringla ends. So if you wanted to, you could start reading Heimskringla, move on to Sverrir's Saga, then to the long version of Saga of the Baglers and finally the Saga of Hakon Hakonsson the Old, and thus read a continuous history of medieval Norway from the Time of Myths to 1263 AD.

The 1907 translation of Heimskringla can be read online: here