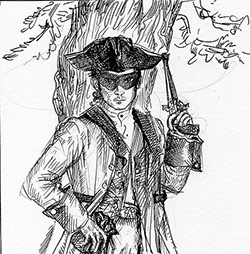 Stand and deliver
Your money or your life
"He'd a French cocked-hat on his forehead, a bunch of lace at his chin,
A coat of the claret velvet, and breeches of brown doe-skin;
They fitted with never a wrinkle: his boots were up to the thigh!
And he rode with a jewelled twinkle,
His pistol butts a-twinkle,
His rapier hilt a-twinkle, under the jewelled sky."
—The Highwayman

A highwayman, put simply, is a guy who robs people on highways. The archetypal highwayman who is usually invoked by the word was found in Britain between, say, the years 1500 to 1800, although the same basic stuff went on elsewhere and elsewhen, particularly The Wild West, in which they were known as road agents. They interrupt the journeys of rich people riding in coaches to say things like "your money or your life!" and "stand and deliver!". Standard gear seems to include a black outfit (possibly including a hat with a feather in it), a sword-and-gun combo, and perhaps a Domino Mask and above all a horse since that allowed them a quick escape. Armed robbers who weren't mounted were known as footpads.

At times, highwaymen were seen as glamorous. For various reasons (including the fact that they rode horses) they were considered a cut above common bandits. A proper highwayman, instead of being scruffy and furtive, was dashing and debonair—truly the Gentleman Thief of armed robbery. Some of them were built up as folk heroes ("...Just Like Robin Hood!"), and they have also been stock Love Interests in romance novels (perhaps because All Girls Want Bad Boys?). In certain types of story, it's also quite likely that secret identities will be involved—voluminous cloaks and nocturnal tendencies make it relatively easy for a prominent Rich Idiot With No Day Job to conceal who they are, or for a woman to avoid being known as such. Popular in The Cavalier Years, where the English Civil War is often blamed for their being forced to take up the occupation. A common occupation for the hero of a Swashbuckler.

Highwaymanning became less attractive as a career with the development of toll roads (which are older than some people realise), steam trains (which get robbed under a different trope), and organised police forces. In works written recently, highwaymen tend to appear as parodies or deconstructions more often than they are played straight. Even so, elements of this trope persisted in the archetype of the pulp-era Proto-Superhero, many of which could be considered the urban successors of Just Like Robin Hood highwaymen.

Not to be confused with the country Supergroup of Waylon and Willie and Cash and Kris, though they do sing about being one (for the first verse of the song anyway)...