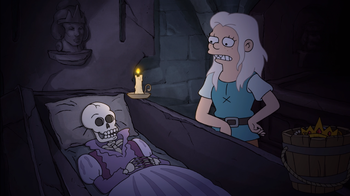 "Oh, my sweet biba, remember when you used to sit me on your lap and tell me stories? Well, I'm in a gang now."
"The sheer defiance of reasoning and decorum leads me to believe that Tiabeanie is now what they call a teenager."
—Odval

Bean, Elfo and Luci are on a night out, when they find an unattended carriage. Luci dares Bean to steal it, and she does, taking the others on a joyride, but the police (riding donkeys) begin to persecute them. To avert a blockade, Bean leads the carriage towards a broken bridge and attempt to jump over the river: the horses make it, but the carriage doesn't, leaving the trio stranded - and the woman in the carriage to drown.

Arriving to the castle, they find the drawbridge risen, but Bean easily swims across the river, while Luci just perches on Bean and Elfo gets swept up towards the waterfall, falling into the sea. Bean rescues him, and while they celebrate their night out, Elfo sees a lemon Bean's father got during a crusade. Bean needs little prompting from Luci before breaking the box it is in and eating it - much to King Zøg's dismay, who complains that his daughter has been out of control ever since her mother's death.

Bean sleeps too little before the sun wakes her up, and she decides to perk herself up with something - such as her stepmother's snakeroot, which she steals while Oona's distracted.

Cloyd and the Enchantress comment on how Luci's corrupting Bean, when their servant Jerry interrupts.

The trio eats the snakeroot, and they begin to act out while under the influence: when the effects drop, Bean is caught by a bunch of thieves that want her to join in their potato heist, but Bean tells them she knows of far more valuable treasures - such as those under Queen Dagmar's statue, which hides the royal tombs. Bean takes all of her dead relatives' jewels, but when it's time to leave, the thieves betray her, taking the jewels and leaving her in the tomb.

The next morning, Bean is brought before her father, who has to confront the fact that her daughter has committed several crimes, and he sends her to her room - where she tells Luci to stop harassing her - while the King and his council consider what to do. Sorcerio suggests that Bean may be possessed by a demon - incidentally shocking Cloyd and the Enchantress - so they need to perform an exorcism. However, Sorcerio's attempts to deal with it "scientifically" (with smoke, a lodestone and jiggling) fail - mostly because the demon is outside - so he suggests religious magic: Prime Minister Odval brings in the world's foremost exorcist, Big Jo.

Big Jo comes, and the Enchantress has Luci possess Bean to protect himself, but Big Jo sets Bean's bed on fire, forcing Luci to get out to put it out, and Big Jo captures Luci. While Bean and Elfo enjoy it at first, but soon they realize they will miss him, and they set out after Big Jo, who is taking Lucy and all the other demons he has captured to a volcano. After a short interlude with the thieves - who have become highwaypeople - Bean and Elfo reach the volcano and save Luci in the nick of time. Big Jo captures Elfo and offers a hostage exchange, but Bean cuts off Big Jo's arm and Elfo pushes him into the volcano, killing him. While Bean and Elfo free Luci, Big Jo's cart falls down a cliff, freeing all the demons he had captured.