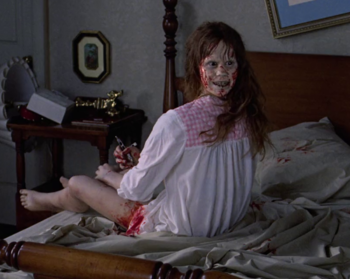 "Do you know what she did? Your cunting daughter!"
Advertisement:

A character is shown to have the ability to dislocate their bones in very bizarre places. The most popular way is turning your head 360 degrees before facing the front again. Can fall into either Squick and/or Nightmare Fuel for some people, since it doesn't look natural.

for a compilation of this trope.

Often done as a Shout-Out to the Trope Namer, The Exorcist.