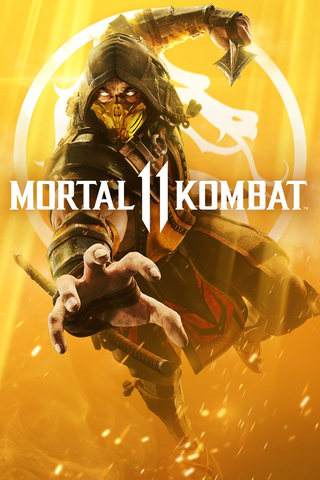 You're next. note Also, Scorpion is about to make you GET OVER HERE!
"This... was not your destiny, Shinnok. Once again, the Thunder God has upset the balance of history. But know this: The arc of the universe bends to my will. It is only a matter... of time."
— Kronika, Story Mode Prologue
Advertisement:

Mortal Kombat 11 is the eleventh official Fighting Game entry in the Mortal Kombat franchise and the sequel of Mortal Kombat X, which was released on April 23, 2019 for PlayStation 4, Xbox One and PC, and also the Nintendo Switch, being the first MK since Armageddon to release on a Nintendo platform. It is developed on a highly modified version of the Unreal Engine 3.

Following the defeat of Shinnok in X, an ancient goddess by the name of Kronika appears and declares that she will set right the damage Raiden has done to the proper course of history... by siding with the evil Revenants of Netherrealm and other villains to wipe out the current timeline and create a new one. With the realms converging in a Time Crash that spells Armageddon for all, past and future versions of the forces of Light find themselves teaming up to stop Kronika before it's too late.

Along with previous series improvements, 11 introduces a much deeper customization system: not only can each character's move set be radically changed with the new Custom Variation system, but their equipment and accessories can also be modified to create a unique look.

On May 6, 2020, the Aftermath DLC was announced, revealing that Shang Tsung has decided to get involved in the immediate aftermath of the "Normal" ending, with several other returning characters involved. It was released on May 26, 2020. An Updated Re-release, Mortal Kombat 11 Ultimate, which bundles the game and all its DLC, was released on November 17, 2020, and brought the game to the PlayStation 5 and the Xbox Series X|S.

Raiden: I look forward to meeting again, in the next timeline.
Liu Kang: Then I will not say goodbye.

"This has happened before"

Raiden realizes that Kronika has been manipulating him and Liu Kang to fight across multiple timelines.

"This has happened before"

Raiden realizes that Kronika has been manipulating him and Liu Kang to fight across multiple timelines.