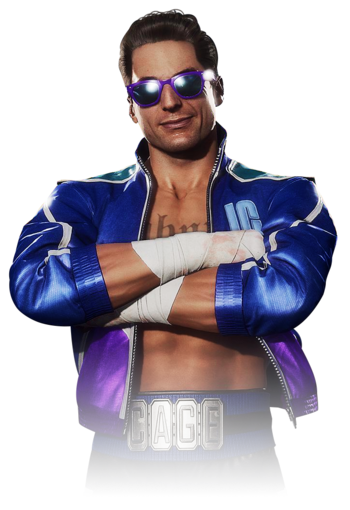 Johnny Cage, born Jonathan Carlton, is a Hollywood movie star. Originally entering the Mortal Kombat tournament to display his fighting skills and prove himself to skeptical movie critics and the movie-viewing public, Cage becomes one of the brave and loyal warriors for Earthrealm.

In Mortal Kombat, when Shang Tsung's island fortress began to crumble because of his defeat to Liu Kang, Raiden saved Johnny and dropped him off at a boat that belonged to the Special Forces Agency near the island. Not long after that, Cage traveled into Outworld to join the other Earthrealm warriors in MK2. Defeated, Kahn ordered his forces to hunt down the surviving warriors when he steals the souls of Earth's populace in Mortal Kombat 3. Though his comrades managed to make it out alive, Johnny was not so lucky and was killed by Motaro. During the events of Trilogy, he was brought back due to his soul being blocked from going to the afterlife, and fought alongside Earth's warriors until they won, upon which he ascended to Heaven. Raiden brought him back permanently during the events of MK4. However, Johnny was killed once again during the final assault on the Deadly Alliance's Tarkatan warriors.

Later, he is, as well as many other warriors, restored to life one more time by Onaga and made into his slave. Some time later, he was freed from this state by Ermac and the spirit of Liu Kang, in time to join the battle of Armageddon.

Mortal Kombat 9 sees Cage have a much more... err... outgoing personality, but it also makes him much more heroic, being a genuine part of the heroes' team. He also serves as a sort of Audience Surrogate, as he's one of the few normal humans amidst the Fantasy Kitchen Sink cast. In Mortal Kombat X it's revealed that he and Sonya have a daughter, Cassie Cage.

He would later meet up with his younger self in Mortal Kombat 11 and they're working together to thwart Kronika's Evil Plan. Now with a Self-Demonstrating page.