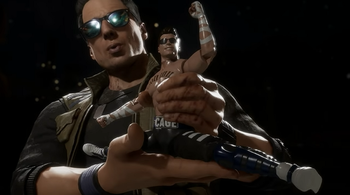 Now with nut-punching action!
Mortal Kombat 11 may be Bloodier and Gorier than previous titles, even for a franchise that has already largely relied on upping the ante in that regard with each passing game, but there's still enough humor to ensure you'll bust a gut.

Per wiki policy, Spoilers Off applies to Funny pages. All spoilers are unmarked.