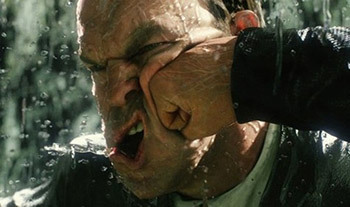 Agent Smith will feel that for a long time.
Advertisement:

Freezing or slowing time right at the moment of an impact to create the impression that something hits harder, or for dramatic effect. For particularly dramatic scenes it may continue into a full-blown Overcrank. Some video games will also use it to make combo input easier. The trope name comes from the term used for this in the Guilty Gear fighting game series.

Compare Bullet Time. May be combined with Hit Spark.

If you get an Excellent on a Hammer attack, time slows as the blow connects.

If you get an Excellent on a Hammer attack, time slows as the blow connects.