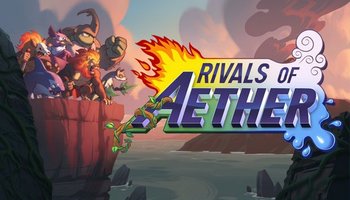 Rivals of Aether is an Indie Fighting Game heavily inspired by Nintendo's Platform Fighter franchise Super Smash Bros.. Developed by Dan Fornace, the game takes place on the planet Aether, where four warring civilizations themed after the classical elements of fire, water, earth, and air use the powers of their respective elements to do battle.

Like Super Smash Bros, Rivals of Aether is a Platform Fighter where the goal is not to deplete your opponent's health, but rather to force them off the stage by knocking them progressively further away or simply blocking attempts at recovering. However, unlike Super Smash Bros, there are no items, you cannot grab ledges, and shields and grabs are replaced with a parry system that rewards proper timing by stunning opponents and granting temporary invulnerability. The game is designed to be highly competitive with emphasis on combos and extremely aggressive play-styles, and thus has a high skill ceiling to attract veterans of the competitive Smash Bros scene while retaining a skill floor low enough so that practically anyone can grab a controller and have a good time with some friends.

The game was fully released for PC on March 28, 2017 and is available on Steam. The Xbox One version was released on August 22, 2017. The Definitive Edition, an automatic update for the Steam release and downloadable purchase for the Nintendo Switch, released on September 24th, 2020. It adds the game's 6 DLC characters to the base roster alongside several tweaks to UI, an expanded Abyss Mode, new costumes, updated music, improved netcode, the brand new Tetherball Mode, and other features. Another update adding four Steam Workshop characters to the official game roster is set to come in late 2021 for both PC and Switch.

Following the game's success, the development team has sought to expand upon the game's universe, and as of the April 2021 Rivals Direct

, the larger Aether series consists of these spin-offs and follow-ups:

The character of Orcane would go on to represent Rivals in crossover Mascot Fighters such as Indie Pogo and Fraymakers.

Tropes present in Rivals of Aether:

Tropes present in Lovers of Aether: