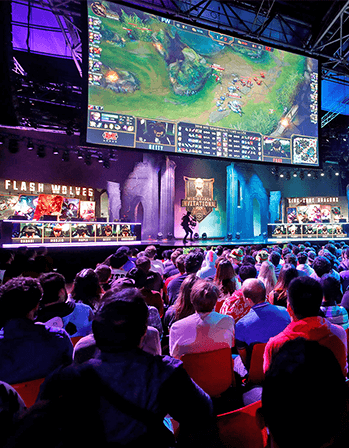 Game play at the highest level. This is beyond the arcade, way beyond Xbox Live, way, way beyond just sitting on the couch with your buddies. This is the best players in the state/country/world getting together to slug it out, the winner is usually awarded prize money, from mere hundreds up to several millions. note The 2015 Dota 2 International first place prize was over 6 million US dollars.
Advertisement:

Long before the advent of computer games, tournament play was the highest level of traditional board-games, such as Chess, Go and so on. Regardless of the game played, expect to see only the best tactics and strategies. Knowledge of the Metagame is crucial. Hardcore gamers are welcomed. Scrubs are not.

Game tournaments are now a Serious Business, where a really good player might be able to make his living off his winnings. Some players even sign contracts with their teams, like professional athletes. Because of this, they occasionally get some flak from other fans who accuse them of being "Stop Having Fun" Guys, specifically Tournament players of games like Super Smash Bros., where all items are turned off, and several stages are banned. On the other hand, who wants to lose the finals (and a huge payday) just because a bomb spawned on your face?

The "Stop Having Fun" Guys trope derives from players pushing tournament rules outside of tournaments.

Dreams of competing in national tournaments and destroying the 12-year old Asian god-level champion tends to breed tourney-knowledgeable enthusiasts whose verbal knowledge of the games they play tend to be greater than their actual level of skill (which is pretty much the case for many announcers and analysts for non-gaming competitive outlets as well).

Non Video Game applications of this trope include: