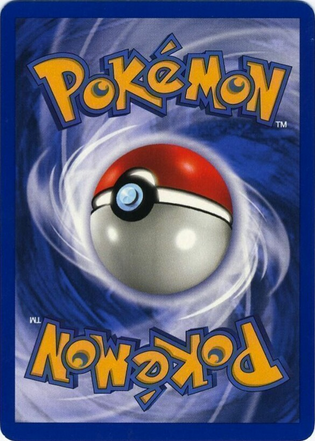 Gotta collect them all!
A trading card game based on the popular Pokémon franchise. Recursively, the card game itself became a pair of video games, of which only one left Japan. Really likes making people flip coins.
Advertisement:

The starting game play is simple: the players draw their hands, and then set aside 6 cards to be "Prize Cards" of which the player can take one whenever they Knock Out an opponent's Pokémon, winning when they claim all six. The players then play any Pokémon they have (redrawing if they don't have any) and the game officially begins. In a given turn, the players can add Pokémon to their bench (up to 5), evolve their Pokémon (although they can only evolve one stage per turn), play Trainer cards that have various benefits, add an Energy card to one of their Pokémon, retreat their active Pokémon for one in the bench, or attack with their active Pokémon.

The game relies heavily on "Energy Cards", 9 (initially 6, later 8) cards representing the different Pokémon types (though there is an 11th Dragon-type with no Energy equivalent outside of Roaring Skies' Double Dragon Energy card, and the much earlier Colorless energy which has no Basic energy card, but serves as a "Wild Card", being fulfilled with the other energy types, as well as having the oft-reprinted Double Colorless Energy card), and the only cards the player is allowed to have more than four copies of in a deck. In general, a Pokémon of a specific type will have attacks that require Energy of that type, although some do have "Colorless" energy requirements, which can be fulfilled by any of the 11 types. Because the player is limited to only playing one Energy Card per turn, it's important for them to manage their energy distribution wisely, as a benched Pokémon that already has energy on it will be able to start fighting much quicker than one that doesn't. Stronger attacks will require more energy, with the strongest attacks requiring the player to remove one or all of the Pokémon's attached energy, limiting their use. Pokémon also have retreat costs, the number of energy cards that must be removed in order to switch out for a Pokémon in the bench, which is also (usually) proportional to the Pokémon's power.

Can also be played online, though there's software to download first.

Physical booster packs and decks now come with a digital code that allows players to redeem them in the online version.