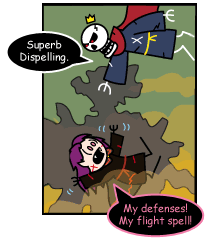 "Way to dispel your own spell, de Spell!"
— Scrooge McDuck (making an Obligatory Joke), DuckTales, "The Shadow War Part II: The Day of the Ducks!"
Advertisement:

Magic with the ability to remove the effects of other magic. A form of Anti-Magic (and Sub-Trope to it), this applies to any ability that is used to reverse the effects of another spell that has already worked. If someone has been changed into a frog, a magic spell to change someone into his original form is an example of Dispel Magic.

Contrast Counterspell, which is a spell that interrupts another spell and prevents it from working in the first place, and No Ontological Inertia, where magic fades naturally upon the death of the one who cast it. Anti-Magic can prevent magic from happening at all as a passive defense, while Dispel can only remove magic that has already taken hold.

Super-Trope to Status-Buff Dispel: Anything that dispels a Status Buff specifically goes there.