Video Game / Eye of the Beholder 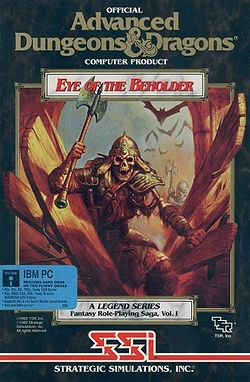 Eye of the Beholder is a trilogy of RPGs developed in the early nineties, the first two by Westwood Studios that would later be known from games such as Command & Conquer, and the third one by Strategic Simulations Inc., that also published all three games.

The games use a simplified version of the rules for Advanced Dungeons & Dragons 2nd edition, in the Forgotten Realms campaign setting.

All games are first-person, and feature an adventure party, between four to six members, going on quests and fighting evil. The first game has them hired by the lords of Waterdeep to investigate an evil residing under the city. It had an Absurdly Spacious Sewer, not just one but two ruins of lost civilizations beneath Waterdeep, and an infamous ending, where the player was treated a window of text before dumping them back to DOS (the Amiga version, however, added a proper ending cutscene).

The second (The Legend of Darkmoon), generally thought to be the best of the series, involves the party checking out an ancient temple for Khelben "Blackstaff" Arunsun. It offers more roleplaying content, and a more proper ending.

The third game (Assault on Myth Drannor) sends the player into the ruined city of Myth Drannor. It was not made by the original developers, and is generally considered a massive disappointment.

A spiritual successor, Lands of Lore, was created by Westwood in lieu of a third Eye of the Beholder after the split with SSI over creative differences.

A remake of the first game was released for the Super Nintendo, and later for the Game Boy Advance. It was also ported to Mega CD, with music composed by Yuzo Koshiro. Note that this remake diverges quite a lot from the original game, both in game mechanics and in that it adds sub-boss enemies.

The trilogy is available on GOG.com as Forgotten Realms: The Archive Collection One

Eye of the Beholder provides examples of: