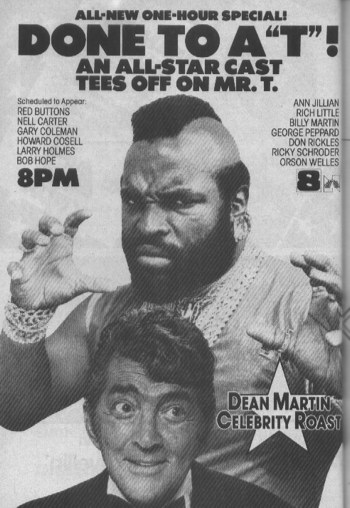 No fools were pitied during the filming of this event.
"Boom, roasted."
— Michael Scott, The Office (US)
Advertisement:

In comedy, The Roast is a specific kind of comedy performance. Typically mixed with a banquet, the Roast is, at its basest, where one comic (or other kind of personality/celebrity) is brought on stage to be made fun of by a collection of his/her closest friends. The standardbearers for the Roast are the New York Friar's Club, who have been roasting celebrities since the early 1950s. Only rarely have these been seen by the rest of the world, either in video offers seen on late-night TV or through Comedy Central, who got the rights to broadcast a few of them in the early 2000s. Another series of roasts were hosted by Dean Martin in the 1970s (he was the roastmaster for all of them), and revived thanks to those late night Infomercials by Guthy-Renker.

While it may look and feel spontaneous, it really isn't. The Roastee has just as much say in the creative process as the producers, including choosing a Roastmaster (Master of Ceremonies who fires the first salvos at the Roastee and introduces the other guests) and other Roasters. Comedy Central roastees include Denis Leary, Jeff Foxworthy, Pamela Anderson, William Shatner, Flavor Flav, Bob Saget, Larry the Cable Guy, Joan Rivers, David Hasselhoff, Donald Trump, Charlie Sheen, Roseanne Barr, James Franco, Justin Bieber, Rob Lowe, Bruce Willis, and Alec Baldwin.