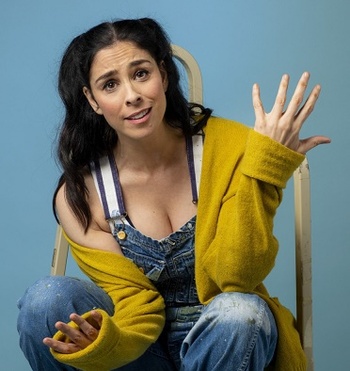 "I was always the class clown; I made my family laugh, and that was when I was always happiest."
Advertisement:

Sarah Kate Silverman (born December 1, 1970 in Bedford, New Hampshire) is an American comedian and actor known for her incredibly dark and vulgar sense of humor.

She was a cast member and writer on Saturday Night Live for the 1993–94 season, but didn't show off the humor she'd be known for today and was let go after a season via fax. (Ironically, she came back to host the show for its 40th season, pointing out during her monologue that she really hadn't been featured much during her tenure and that her most memorable performance was as a phony audience member who would ask the celebrity host inane questions... which led to Silverman taking questions from herself using old clips from the 1990s SNL episodes she was on.) Despite this, Silverman had a handful of impressions: three when she was on the show (Cher, Natalie Merchant, and Marisa Tomei) and one when she came back to host (Joan Rivers, whose recent death was in the news at the time, so the show did a memorial sketch where Rivers gets a comedy roast in Heaven).

In the early 2000s she appeared as a regular on Mr. Show and Greg the Bunny and a recurring voice actor on Crank Yankers, showcased her Standup Comedy act in the 2005 film Jesus Is Magic, made a memorable appearance in the documentary The Aristocrats, and frequently guested on then-boyfriend Jimmy Kimmel's Jimmy Kimmel Live!. From 2007–10 she starred in The Sarah Silverman Program, a sitcom in which she played a humorously fictionalized version of herself.

On the big screen she has had supporting roles in such films as There's Something About Mary, Heartbreakers, School of Rock, A Million Ways to Die in the West, Popstar: Never Stop Never Stopping, The Book of Henry, Battle of the Sexes, and Marry Me (2022). On TV she has made guest appearances in Frasier, The Good Wife, JAG, Masters of Sex (alongside her then-boyfriend Michael Sheen), Monk, Seinfeld, Star Trek: Voyager, and V.I.P.. She's also done animated voice work, in the film Wreck-It Ralph (and its sequel, Ralph Breaks the Internet) and on such shows as American Dad!, Bob's Burgersnote as Ollie Pesto. Her sister, Laura — who sounds similar to Sarah and did voice-acting on Home Movies as Brendon's father's new girlfriend — is Andy Pesto, Futuramanote as the second voice of Fry's ex-girlfriend, Michelle as of "The Cryonic Woman". When Michelle was introduced in "Space Pilot 3000," Kath Soucie voiced Michelle and The Simpsonsnote on the episode "Stealing First Base" where she plays a girl from another fourth grade class who can't decide whether or not she likes Bart.

She has also starred in specials for HBO (2013's We Are Miracles, which earned her a Primetime Emmy Award for writing) and Netflix (2017's A Speck of Dust), hosted a weekly political comedy/talk show called I Love You, America for one season (2017–18) on Hulu, and in 2020 she began hosting her own podcast called – what else? – The Sarah Silverman Podcast. The Bedwetter, a musical adaptation of her 2010 memoir of the same title co-written with Joshua Harmon (Bad Jews) and the late Adam Schlesinger (Fountains of Wayne), premiered off-Broadway in 2022. She has also been tabbed to host Stupid Pet Tricks, a TBS series spun off from the recurring segment on David Letterman's late-night shows.

Silverman has dated fellow comedian and former Daily Show writer Rory Albanese since 2020. Her older sister Laura Silverman is also an actor, and has worked with Sarah on numerous projects.