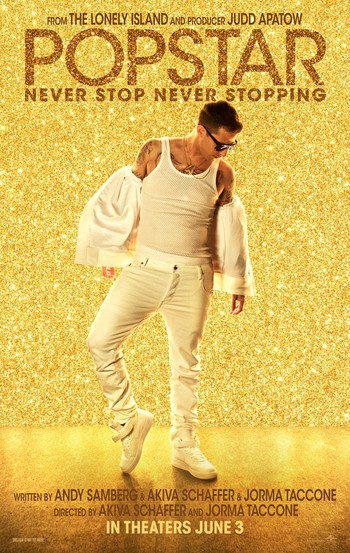 "Ever since I was born... I was dope."
— Conner4Real
Advertisement:

A very extreme Affectionate Parody of the music business and modern celebrity as a whole, Popstar focuses on pop-rapper Conner4Real (Samberg). Once a member of a famous rap trio called the Style Boyz alongside childhood friends Owen Bouchard (Jorma Taccone) and Lawrence Dunn (Akiva Schaffer), he found extreme success once he went solo, albeit on less-than-amicable terms.

Now living a reckless, debauchery-laden high life surrounded by an entourage of yes men, fueled by intensely overinflated narcissism, and with his former band members seemingly left in the dust (Owen merely being Conner's background DJ and Lawrence quitting music altogether to live on a farm), Conner launches his second solo album CONNquest — the single most anticipated album of the decade.

Due to a number of reasons, the album sales are not what Conner expected.

Hilarity Ensues as he struggles to keep his celebrity status afloat, trying anything he can to maintain his image — anything except getting back together with the Style Boyz.

"Equal Rights" is a song about legalizing gay marriage and supporting homosexuality... that has Conner repeatedly insist he's not gay.

Example of:
Have I Mentioned I Am Heterosexual Today?

"Equal Rights" is a song about legalizing gay marriage and supporting homosexuality... that has Conner repeatedly insist he's not gay.