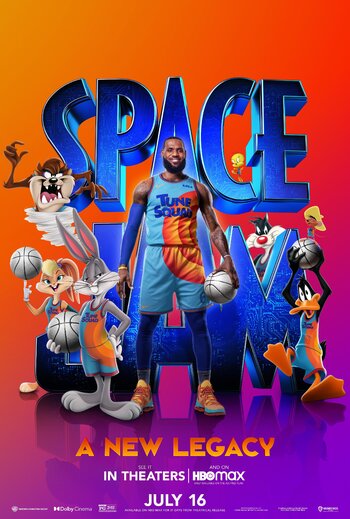 Come on and slam
And welcome back to the Jam.
"The only way you're getting your son back is if you and I play a little basketball."
— Al-G Rhythm
Advertisement:

Space Jam: A New Legacy is a 2021 live-action/animated film that serves as the long-awaited sequel to 1996's Space Jam. Ryan Coogler produces and Malcolm D. Lee directs, while LeBron James takes the main protagonist mantle from Michael Jordan this time around. The film is set to be released on July 16, 2021 both in theaters and for a one-month duration on HBO Max.

In the film, LeBron and his son Dom (Cedric Joe) are having trouble connecting; LeBron wants Dom to be a basketball player like him, but Dom is more interested in becoming a video game developer. While on a tour of Warner Bros. Studios, LeBron and Dom find themselves getting sucked into a digital server ruled by the rogue A.I. Al-G Rhythm (Don Cheadle), that houses worlds from the entire nearly-100 year old library of the studio. Dom soon gets captured by Al-G and LeBron gets sent to the world where the Looney Tunes roam...but with only Bugs Bunny there. Teaming with Bugs, they must traverse the Server-verse, find the rest of the Tunes and take to the court to rescue Dom by - how else? - challenging Al-G and his team of superpowered digital versions of NBA stars to a basketball game.

A novelization of the movie was released on June 1st, a month before the movie's release date of July 16th.