Western Animation / Out There 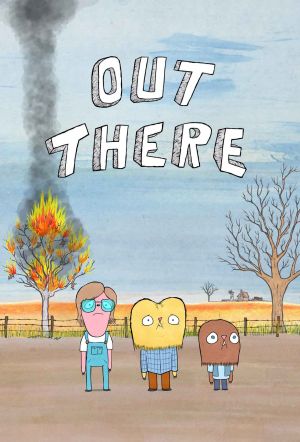 Growing Up is weird to do.
Advertisement:

Out There is a coming-of-age Dramedy created by former South Park animator and animation director, Ryan Quincy. It follows the misadventures of the socially awkward Chad (Voiced by Ryan Quincy himself), his little brother Jay (voiced by Kate Micucci), and his best friend Chris (voiced by Justin Roiland). Living in the small town of Holford, the boys wander its surreal, bleak landscape waiting out their last few years of adolescence. Along the way, viewers meet Chad's conservative parents, Wayne and Rose (voiced by John DiMaggio and Megan Mullally, respectively), as well as Chris's single mother, Joanie (voiced by Pamela Adlon), and her disastrous boyfriend, Terry (voiced by Fred Armisen). They also meet the object of Chad's affection, Sharla (voiced by Linda Cardellini).

The show lasted 10 episodes on IFC from January to March 2013. In October of 2018, it became available for streaming on Hulu.

Not to be confused with the webcomic with the same name.

See also Future-Worm!, another animated series from the creator of Out There made for Disney XD.

Out There provides examples of: