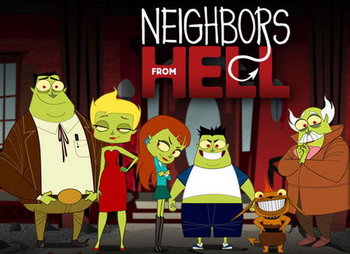 Neighbors from Hell was a short-lived Flash animated sitcom created by South Park veteran Pam Brady that premiered on June 7, 2010 on TBS. The plot basically concerns the adventures of a family of devils that must relocate to Texas in order to keep a powerful new drill with the ability to plow straight into Hell itself from becoming active, thereby destroying their underworld. ...Yeah.

TBS did not renewed the series for a second season, with no plans of a revival in the foreseeable future.

It should not be confused with a series of PC games by the same title.