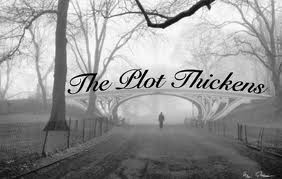 Plot, meet thick. Thick, meet Plot.
The plot "thickens," as they say. Why, by the way? Is it a soup metaphor?
— Gustave H., The Grand Budapest Hotel
Advertisement:

Stock Phrase often said after a turning point in the plot.

It usually refers to things becoming overly complex or mysterious. Today this term is often Played for Laughs. Coined in the 17th century, it originally described the plot of a play that was overly intricate, and by the late 1800s it was used for increasingly complex mysteries in detective stories.

The phrase is sometimes parodied as "The plot sickens." You may also hear "the plot thins" - usually uttered after a major Anti-Climax.

open/close all folders
Film
Literature
Live Action TV
Advertisement:
Newspaper Comics
Poetry
Radio
One episode of I'm Sorry I'll Read That Again, had this exchange between the narrator and a character:

Narrator: The plot thickens
Other voice: And tho do the joketh