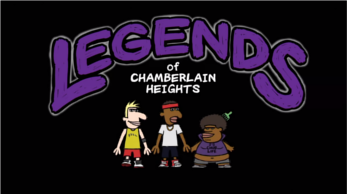 Legends of Chamberlain Heights is a 2016 Comedy Central animated series created by Brad Ableson, Mike Clements, Quinn Hawking, Josiah Johnson and Michael Starrbury, who also make up most of the voice cast.

The show is centered around three inner-city high school freshmen; Grover Cummings, "Milk" Milton and Jamal, who attend the Michael Clarke Duncan High School in the neighborhood of Chamberlain Heights. The three dream of achieving basketball glory and becoming "legends", especially Grover, whose older brother Montrel was a hugely successful high school basketball player before he turned into a washed-up has-been. Unfortunately, the three have dreams that don't match up with their actual skills, and are unable to escape their hated roles as benchwarmers. On top of that, they're subject to the cruel social realities of high school. Rounding out the cast is Grover's 8-year-old drug-dealing brother Mali, his love interest Cindy, Jerk Jock bully Randy, Jamal's on-off girlfriend Medina, and Jamal's identical sister Shamal.

Despite a very mixed response and a serious case of Broken Base, Chamberlain was renewed for a second season before it even premiered. Similar to an earlier Comedy Central series, Brickleberry, the show relies heavily on Vulgar Humor; which itself can be very divisive depending on the viewer. The show was not renewed for a third season.

Example of:
Renewed Before Premiere