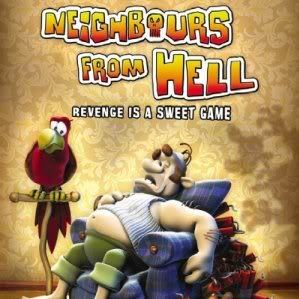 Neighbours From Hell (or Neighbors From Hell in the U.S.) is a point-and click game released by JoWood Interactive in 2003. The plot of the game revolves around Woody, a generally nice guy until his obnoxious neighbor Rottweiler finally annoys him to the point that he snaps. Woody decides to call up his TV producer friend and the two secretly break into the neighbor's house and wire hidden cameras in every room, after which Woody proceeds to break into the house repeatedly to pull various pranks on Rottweiler. The results are broadcast as a television show.

The game was followed up by Neighbours From Hell 2: On Vacation in 2004 which sees Woody follow the neighbor on his trip around the world to cause even more grief. Tagging along this time are Olga, a woman from the neighborhood that Rottweiler has a disturbing obsession with; Olga's son; Mrs. Rottweiler, the neighbor's overbearing mother; and her yapping dog. The game takes place aboard the cruise ship as well as stops in China, India and Mexico.

The first game saw slightly enhanced ports to the Nintendo Gamecube and Microsoft Xbox though they were only released in Europe. The second game saw a port for the Nintendo DS but again, only in Europe. The only US release of the series has been on PC. Speaking of PC, the duology has since been brought over to Steam

. It has also been ported to the Nintendo Switch as Neighbors back From Hell, which would in turn be ported back to PC.

Not to be confused with a cartoon series of a similar name about demons from Hell. Or Hello Neighbor.