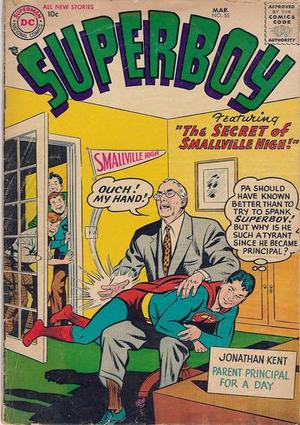 Someone just said or did something stupid, kinky or childish, and someone else feels they have to correct them and punish them. However, instead of doing it with words or with a Dope Slap, they decide to administer a good, old-fashioned spanking, a comedy goldmine. Hilarity Ensues. May be accompanied by Punctuated Pounding.

The comedy may lie in the situation of who is spanking whom (for instance, a child may spank a parent or another authority figure; or a grown-up princess acts like a real Royal Brat and gets spanked by her father the king in front of the whole court for bigger impact) or a person may be spanked with a rather humorous implement such as a rolled-up newspaper or a flower. It can also serve as some humorous comeuppance for an Alpha Bitch or a Spoiled Brat. Or the spanker may take off his belt— and his pants fall down. Sometimes the humour is mined from this trope's overlap with Kinky Spanking and the way spanking is sexualized in inappropriate or surprising contexts.

It may cause some Values Dissonance in modern audiences as Corporal Punishment is becoming more and more frowned upon. Because of this, spanking played for comedy can often come off as Dude, Not Funny!.

It's a subtrope of Joke of the Butt and Slapstick, and a sister trope to other spanking tropes Kinky Spanking and Don't Make Me Take My Belt Off!. For more general posterior-punishment, see Literal Ass-Kicking and Pain to the Ass.