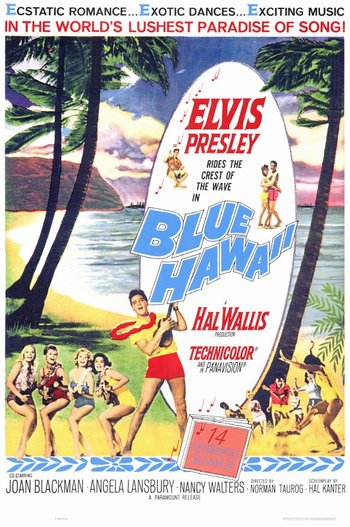 Wise men say, "Only fools rush in."
Blue Hawaii is a 1961 musical film directed by Norman Taurog, scripted by Hal Kanter and starring Elvis Presley. This was one of his first and, depending on who you ask, his best film after he got out of the Army in 1960, as well as his first (and again, arguably best) film that was shot in Hawaiʻi (the other two being Girls! Girls! Girls! and Paradise, Hawaiian Style).
Advertisement:

The film follows Author Avatar Chad Gates (Presley) who returns home to Hawaii after serving overseas in Europe with the U.S. Army. Despite his mother Sarah Lee Gates (Angela Lansbury) asking him to take over for his father Fred (Roland Winters) as manager of the Great Southern Hawaiian Fruit Company, Chad wants to be a tour guide like his girlfriend, Maile Duval (Joan Blackman). Lucky for Chad, his first clients are a group of four beautiful women. Three of them, which include Ellie Corbett (Jenny Maxwell), are teenagers; their teacher Abigail Prentice (Nancy Walters) is quite a looker herself. The rest of the movie follows Chad's zany adventures on Oahu, which include a hukilau at Hanauma Bay on Oahu, getting arrested after a brawl, and visiting Kauai.

Tracklist for the soundtrack album:

I can't help troping in love with you: