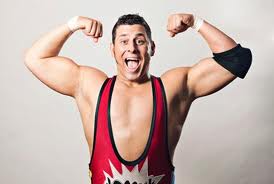 Colt Cabana (real name Scott Colton, born May 6, 1980) is a professional wrestler and comedian who is perhaps best known for his time in Ring of Honor. He has also had noteworthy runs in IWA Mid-South and CHIKARA, and he even had a brief run in WWE as Scotty Goldman after years in their then-developmental company, Ohio Valley Wrestling (with a few televised matches even before). He was also a part of Wrestling Society X as the masked Matt Classic, supposedly a wrestler from the 1950s who used old-school moves such as the airplane spin. In addition to all of this, he frequently wrestles all over the world.

Outside wrestling, Colt has taken up stand-up and improvisational comedy. Every Monday he and comedian Marty DeRosa star in a show called Creative Has Nothing for You, about a wrestler who has difficulties dealing with the writer of a wrestling promotion. Every Thursday he releases a podcast called The Art of Wrestling, in which he interviews anyone he knows within the industry from independent wrestlers or active TNA/WWE superstars. He and Marty DeRosa also do MST3K-style commentary on Highspots' $5 Wrestling series.

In 2020, Colt signed with All Elite Wrestling after making a surprise appearance at the Revolution PPV.

Tropes associated with Colt Cabana include: