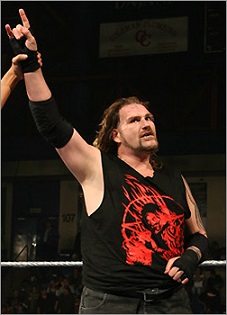 Jonathan Rechner (April 11, 1972 – April 12, 2016) was an American professional wrestler from Spring Lake Heights, New Jersey best known for his work in ECW as Balls Mahoney. After spending a few years as a TV Jobber for WWE and working for his trainer "Pretty Boy" Larry Sharpe's WWA promotion, he first made an impression in SMW as Boo Bradley, the Kayfabe childhood friend of Chris Candido. He made a very brief cameo in WWE in December 1995 as Xanta Klaus. At WWF in Your House 5: Season's Beatings, "The Million-Dollar Man" Ted DiBiase introduced him as the newest acquisition of his Million Dollar Corporation, the evil version of Santa Claus. He had one WWE match in this gimmick, a Squash of Scott Taylor on the December 23 (taped December 19) WWF Superstars, before it was abandoned. He alternated between the Boo Bradley and Abbudah Singh names in the independents until he arrived in ECW in late 1996. Over his time there, he would hold the ECW World Tag Team Titles

three times, 1x w/Masato Tanaka and 2x w/Spike Dudley. After ECW closed, he spent the next few years in the independents until WWE brought him in for ECW One Night Stand 2005, and a year later for the ECW brand, where he would stay until 2008.

"We've got the biggest tropes of them all!":