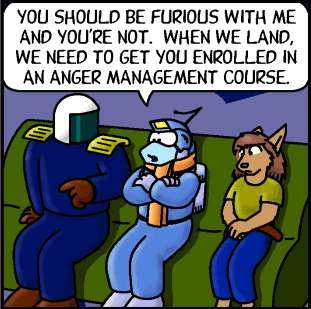 Kindness is a highly valuable trait in people, but, if taken to extremes, also a potentially dangerous one to have. In episodes where the Nice Guy and Friend to All Living Things will unavoidably have to face danger, friends will try to teach them assertiveness, a few self-defense moves, or actual fighting techniques to face threats. The problem lies in that they are too timid, half-hearted, Weak-Willed or kind to avoid their Extreme Doormat tendencies, much less actually learn to fight.

The solution is to teach them anger and rage; rather than dealing with their anger in a healthy way (or more likely, sublimating it) instead channel it into their words and fists - in extreme cases, even going so far as to instil a killer instinct. This can have two outcomes, one good and one bad.

The good outcome results in the character gaining a backbone without losing their better traits. Their nature and demeanor as a kind/caring/friendly person will otherwise remain unchanged, but now they'll stand up for themselves and the weak rather than simply caring for them.

The bad outcome happens when they learn anger too well. In some cases, these kind and caring pacifists subconsciously knew they were carefully balanced over a dormant volcano of potential violence and chose to keep it dormant at all costs. And then their friends went and woke it up. If Phlebotinum is involved, then it is likely paired with An Aesop against changing others to suit you...because they'll turn into a Brainwashed and Crazy dynamo of destruction who revels in their new Superpowered Evil Side. There may be a cry of "What Have I Become?"/"My God, What Have I Done?" if someone they care for is hurt, or killed!

On the bright side, these usually end in Pygmalion Snapback.

Contrast We Want Our Jerk Back! and Tame His Anger. This may be applied to large groups in the form of Training the Peaceful Villagers.