Film / The Bells of St. Mary's 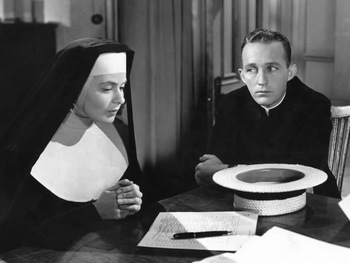 The Bells of St. Mary's is a 1945 musical comedy-drama film directed by Leo McCarey, starring Bing Crosby and Ingrid Bergman.

It is a sequel to the 1944 film Going My Way, with Crosby reprising his role of Father Chuck O'Malley, all-around cool Catholic priest. Father O'Malley has been sent to St. Mary's parish and its dilapidated, crumbling school, where he will serve as the pastor/principal, evaluating the school and reporting to his superiors whether or not it should be closed. Sister Mary Benedict (Bergman), the school's head nun, very much wants to keep it open. She is leaning on businessman Horace Bogardus (Henry Travers), who has purchased the neighboring lot and is building a factory, to donate the neighboring building to the school. Other problems at St. Mary's include Eddie, a meek student and bullying victim who Sister Mary mentors, and Patsy, a child of a broken home whom the school has taken in as a boarding student.

Like its predecessor, this film was a commercial and critical success, earning eight Academy Award nominations (though it only won for Best Sound Recording). Bing Crosby, who'd won Best Actor for his performance in Going My Way, became the first actor in Oscar history to be nominated twice for playing the same character.