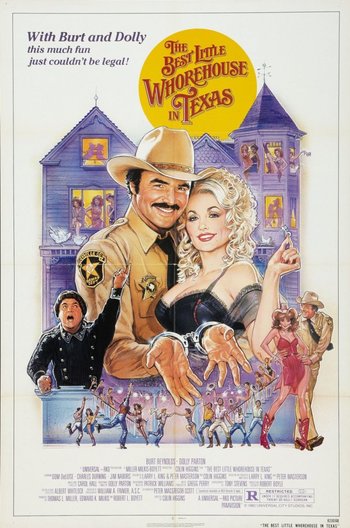 "If you grew up anywhere in Texas, you knew at an early age they was selling somethin' out there - and it wasn't poultry!"
—Deputy Fred
Advertisement:

The Best Little Whorehouse in Texas is a musical comedy with a book by Larry L. King and Peter Masterson, and songs by Carol Hall. The story follows Miss Mona Stangley, who owns the Chicken Ranch, a century-old brothel. She is on good terms with Sheriff Ed Earl Dodd, with whom she once had an affair. Unforturnately, their good times are disrupted by moralist "consumer advocate" Melvin P. Thorpe, who brands the Chicken Ranch "The Devil's Den". When Thorpe acts to try to shut down the Chicken Ranch, Mona and the Sheriff must take action.

The stage production ran on Broadway from June 1978 to March 1982, and then staged a return engagement from May until July. A film adaptation was released around this time, directed by Colin Higgins (9 to 5) and starring Burt Reynolds as the Sheriff, Dolly Parton as Miss Mona and Dom DeLuise as Thorpe. Featuring Jim Nabors as the Sheriff's Deputy and Charles Durning as the Governor of Texas, it had several new songs written and performed by Parton, including her famous "I Will Always Love You".

The film received mixed critical reviews but was commercially successful, being (at the time) the highest-grossing live-action movie musical until Dreamgirls 24 years later. It has developed something of a Cult Following over the years.

The best little tropes in Texas: