Film / Bend of the River 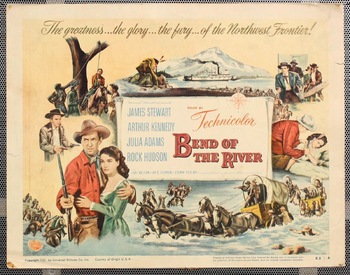 Bend of the River is a 1952 Western film directed by Anthony Mann, starring James Stewart.

It's 1866 and Glyn McLyntock (Stewart) is acting as a guide, taking a group of settlers from Missouri to the Columbia River territory of Oregon. Glyn is haunted by his past: some years ago he was a "border raider" on the Missouri-Kansas border

. Glyn is hoping to start a new life for himself as a farmer or rancher. One night when the wagon train is camped, he rescues one Emerson Cole (Arthur Kennedy) from getting lynched by some people who claim Cole stole a horse. As it turns out, Cole was also a border raider back in the day. Jeremy Baile, the leader of the group of settlers, is none too happy to have Cole with the wagon train. Baile is unaware of Glyn's similar history.

Glyn successfully guides the wagon train to Portland, Oregon, but not before Jeremy's beautiful daughter Laurie (Julia Adams) is wounded in an attack by the Shoshones. Glyn and Jeremy buy food for the winter from Portland merchant Tom Hendricks and then go upriver to scout out a settlement while Laurie stays in Portland to recover. When neither Laurie nor the food shows up at the settlement, Glyn and Jeremy go back to Portland, only to receive unpleasant news. While they were upriver starting the settlement, gold was discovered elsewhere along the Columbia. Hendricks has reneged on their deal and sold their food to the gold miners. And Laurie is dating ne'er-do-well Emerson Cole.