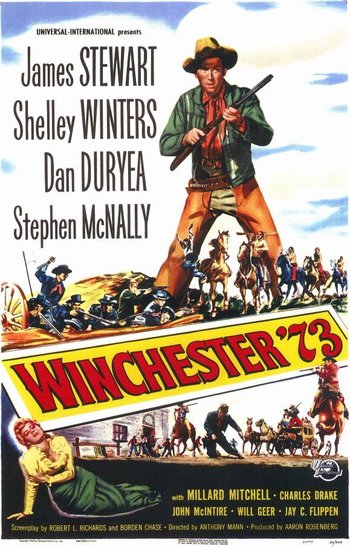 "This is the story of the Winchester Rifle Model 1873, 'The gun that won the West.' To cowman, outlaw, peace officer or soldier, the Winchester '73 was a treasured possession. An Indian would sell his soul to own one."
— Opening title card
Advertisement:

Lin McAdam, a former Texas ranger, is riding with his partner High-Spade Frankie Wilson to track down a man. When they reach Dodge City, they run into Dutch Henry Brown, the man they're looking for (though that's not his real name). As Wyatt Earp, the sheriff in town, is keeping a close eye on both of them and has taken everyone's gun, Lin and Dutch Henry confine their bad blood to a shooting contest that's in town; the winner gets the rifle of the title, which is supposed to be the best gun around. Lin ends up winning the contest, but before he can leave town, Dutch Henry and his gang ambush him and steal the gun. At this point, the film follows both Lin's attempt to catch up to Dutch Henry, as well as the path of the gun, as it ends up with a trader, a Sioux Indian chief, Steve Miller, a man trying to settle down with his girlfriend Lola Manners, and Waco Johnny Dean, a cocky gunman, among others.

Notable for being the first film to team up Stewart and Mann (they went on to make seven more films together), the first of Stewart's Darker and Edgier roles, and most important, the first film where a star (Stewart) agreed to take a lesser salary up front in exchange for a percentage of the profits, which helped change business practices in the movies. Rock Hudson and Tony Curtis, who would both go on to be big stars, appear briefly as a Sioux chief and a U.S. cavalryman, respectively.