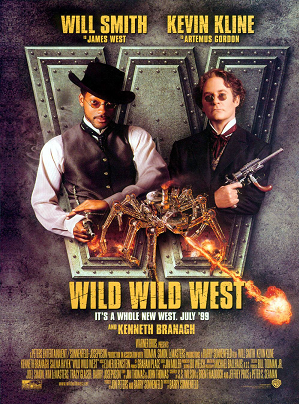 It's a whole new West, alright.
Artemus Gordon: So, what does Loveless have? (notices factory complex) Well... he has his own city.
(out of nowhere a giant mechanical spider shows up)
Jim West: He has an 80-foot tarantula.
Artemus Gordon: Yes, well... I was coming to that.
Advertisement:

Wild Wild West is a 1999 Cattle Punk film directed by Barry Sonnenfeld, starring Will Smith, Kevin Kline, Kenneth Branagh and Salma Hayek. It's The Film of the Series of The Wild Wild West—technically, anyway.

Gordon: Jim.
West: What now, Artie?
Gordon: Mind if I ask you a question?
West: [Beat] Actually, I do, Artie.
[both drive off into the sunset in a Spider Tank]
Feedback