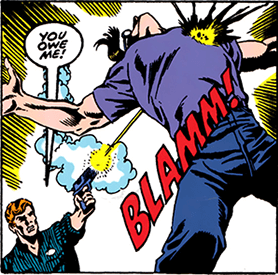 "A true friend stabs you in the front."
— Folklore
Advertisement:

Only a Dirty Coward would shoot someone in the back. Or knife him.

Back-to-Back Badasses is to prevent this — provided the other character is trustworthy.

On the other hand, if they can't let you escape, and you are the Dirty Coward fleeing a fight, it may happen anyway, particularly up against a Combat Pragmatist. It also doesn't apply to Tap on the Head, which is non-lethal and not seriously dangerous — fictionally. If the blow can seriously injure or kill, however, it is a different story.

When The Dog Bites Back, this often comes into play.

It does not necessarily apply to executions, or when the Big Bad decides to turn his back on The Hero in order to stab a hostage. If a Heroic Bystander shoots a villain in the back, it will most likely be considered, well, heroic, which may or may not be just justified by the villain threatening someone else's life.

Sometimes employed as an unceremonious end to what is otherwise a badass famous character — a staple of westerns.

May go hand-in-hand with I Surrender, Suckers.

Compare Back Stab for a video game special move based on this trope. This trope is for narrative uses. If a gameplay mechanic is involved, please move to that trope. Can be used as Dynamic Entry, in which case a Surprisingly Sudden Death usually ensues. Beware Backstab Backfire.