Recap / Doctor Who 2016 CS "The Return of Doctor Mysterio" 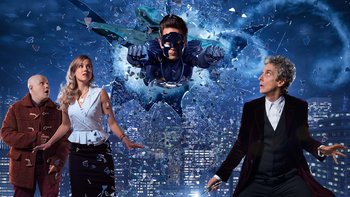 You'll believe... that there is an actual superhero in a show like Doctor Who.note From left to right: Nardole, Lucy Fletcher, the Ghost/Grant Gordon and the Doctor.
Click here to see the Radio Times magazine poster for this episode: 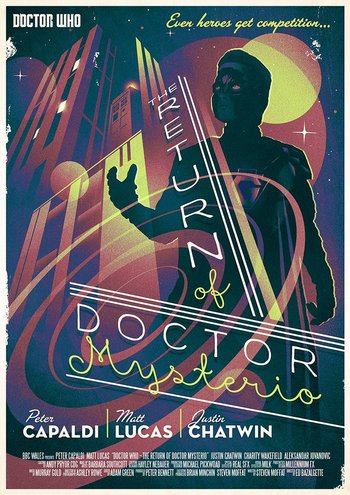 "In a comic book, you know what you'd be called? Doctor Mysterio."
Grant (child): What's happened to me?
The Doctor: Intuitive crystal, plus too many comic books. The gemstone is giving you what it thinks you want. YOU'RE A SUPERHERO!
Advertisement:

The one with Goku. As Superman. Except one is Old Shame, and the other is Captain Ersatz. And no, they're not fighting each other, either. Or having a rap battle.

Written by Steven Moffat. The 2016 Doctor Who Christmas Episode.

Once upon Christmas Eve 1992 in New York City, the Twelfth Doctor got himself into a pickle while trying to correct some of the time disturbances affecting the city - he accidentally sprung a trap he was creating - and found help in young Grant Gordon. A subsequent misunderstanding involving a mystical gem resulted in the comic book-loving boy being granted the thing he seemed to want most in the world — superpowers.

Twenty-four years later, the Doctor and old acquaintance/new companion Nardole are back in N.Y.C. They're investigating Harmony Shoal, a seemingly benevolent corporation actually masterminded (so to speak) by sentient, alien brains that are seeking human host bodies. It turns out that they aren't the only ones suspicious of the company: so is Lucy Fletcher, an investigative journalist. And the Doctor isn't the only extraordinary being on the side of good in this situation — it turns out that Grant Gordon has decided (heedless of the Doctor's orders never to do so) to use his amazing abilities in public as the mysterious masked vigilante, The Ghost. These two heroes will ultimately have to work together not only to save the planet, but also to come to terms with their responsibilities to themselves and those close to them.

Watch the exclusive "Children in Need" clip that premiered on November 21st, 2016 here.

and two "behind the scenes" looks here