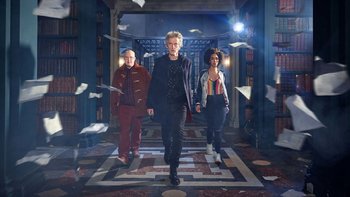 "They read the Veritas and chose Hell."
Click here to see the Radio Times magazine poster for this episode: 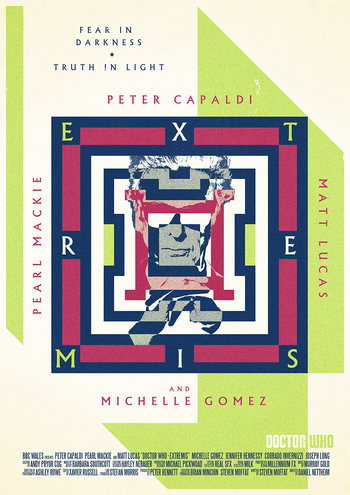 "Goodness is not goodness that seeks advantage. Good is good in the final hour, in the deepest pit without hope, without witness, without reward. Virtue is only virtue in extremis."
"Something’s coming, Bill, something very big. And something possibly very, very bad. And I have the feeling that we’re going to be very busy."
— The Doctor
Advertisement:

The one where everything is a lie.

Written by Steven Moffat and directed by Daniel Nettheim, this is the start of the "Monks Trilogy", a three-part adventure continued in "The Pyramid at the End of the World" and "The Lie of the Land".

The Doctor leans upon the Vault he's been watching over. He is afraid, in despair, and desperate to hide his new vulnerability — his blindness — from the world. He has modified his sonic sunglasses to give him some means of perceiving the world around him, but right now he is focused on a message with the title Extremis...

Once Upon a Time. The Doctor was called to a planet specializing in the execution of criminals. It was shortly after River Song had died, and he was a depressed soul. But he was needed to attend to an execution only one of his kind could perform: The execution of Missy, his Arch-Enemy. Her body would be interred in a vault for 1,000 years in case anything happened, and he vowed to watch over her body during that time. A "priest" — Nardole — came on behalf of the Doctor's late wife to warn him that she wouldn't approve of what he was about to do, to remind him of what River loved about him. But soon the Doctor stood at the lever and pulled, even as Missy plead for her life, that she could be good...

The Present Day, Earth. The Doctor is approached by no less than His Holiness the Pope to come to the Vatican, to descend into the Haereticum — a secret library of blasphemy. A short, ancient text known as the Veritas is there. Those who wrote it, and who once translated it, all took their lives afterward. And it has somehow been retranslated now, with more suicides following. The Doctor must find a way to read this text, to know what it reveals that could be so terrible. It will not be easy, and not only because he is blind. Already a copy of it has been emailed to Swiss scientists. Mysterious figures are stalking him, as well as Bill and Nardole, who find one of the portals they travel by and discover an unfolding horror beyond them.

What binds and entwines these two stories of the Doctor? Death... truth... and the nature of virtue, which is only virtue in extremis.

"How can I save them when I'm lost to the dark?"