Morality Chain Beyond the Grave 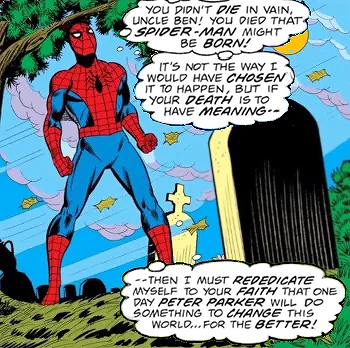 When someone dies (or apparently dies or becomes indefinitely unconscious or is otherwise taken out of the picture), their friends and loved ones have to deal with the aftermath. With emotions likely to be running high, the survivors will be faced with a variety of options and temptations, depending on the situation.

If they are at all thoughtful and respectful, they will sooner or later face the question: "What would the deceased have wanted?" In many cases, someone who is too caught up in grief and/or anger to think clearly will need to be reminded of this point by a cooler-headed friend.

A few common possibilities of actions that they may consider — and then reconsider after realizing that the deceased would not have wanted them to do that:

The grieving character's response when this issue is raised generally comes down to one of two options:

Related to Morality Chain, with the memory of the deceased taking that role in place of a living companion. Also related to What You Are in the Dark: realizing what the deceased would think of your actions (or perhaps believing that the deceased is watching from the afterlife) provides extra pressure to pass the test (or extra angst after failing).

Compare What Would X Do? (where X usually isn't a deceased friend, and the problem is usually practical rather than emotional or moral), Due to the Dead (giving the deceased a respectful funeral and proper mourning), Last Request (where the deceased specifically states a final wish), and Spirit Advisor (where the deceased personally advise the living). Contrast with The Dark Side Will Make You Forget.