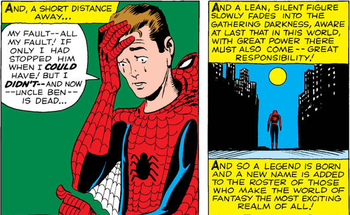 Where it all began.
"This is the crystace [blade] they shall sheathe in my heart if... I use these powers for capricious or selfish purposes."
— Part of the Sentinel's oath, as given in Fusion Fire
Advertisement:

Super Heroes are expected to have a higher moral standard. No abusing your powers for personal gain. Sometimes this is enforced by the authority that granted their abilities, but most often, even if they are aware of the Mundane Utility, it is self-imposed.

What constitutes "abuse"? That gets into a nebulous area. This trope usually involves the more obviously violent powers that could kill someone in a few seconds or violate a person's integrity, but even good powers can make bad people. However, if your family is down on their luck financially, what's a little arm wrestling wager at the pub going to hurt?

Mostly this is a moral stance superheroes took early in their career to make sure they never hit the slippery slope to evil-dom. This happens fast; arm-wrestling for money at the pub will often signal temptation to evil within a few episodes, if not that very one.

In the hands of a poor writer, it is easy for this to turn into a character Cursed With Awesome powers and unable to enjoy them in any way, trapped in a life they didn't choose can easily become You Can't Fight Fate and Hard Work Hardly Works, and is usually a one way ticket to Wangst-ville. It can also degenerate into the idea that benefiting from one's own talents or skills is wrong, and that trying to help others will only end in disaster, but that you are still obligated to do so even knowing that Failure Is the Only Option. The weight of the responsibility of the said great powers is often why heroes have Chronic Hero Syndrome.

Superheroes who follow this trope often become The Cape.

Outside the superhero genre, this is not often a trope relating to the main characters, but many a Reasonable Authority Figure is deeply aware of the responsibilities that come with his post. Indeed, one way to detect whether such a figure is good is how he regards the misery or deaths of the faceless masses; even not knowing any of them, the Reasonable Authority Figure will not regard them as A Million Is a Statistic and if he must sacrifice them, will regard it as Dirty Business.