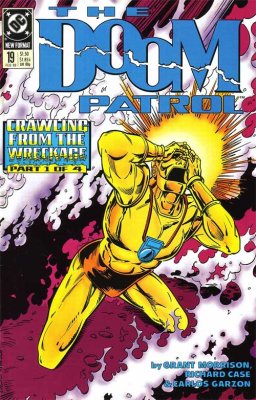 Robotman desperately attempts to make sense of this issue's plot.
Cliff: All I want is the answer to one simple question before I run screaming back to the bug-house: is this real or isn't it?
The Chief: Reality and unreality have no clear distinction in our present circumstances, Cliff.
— The Doom Patrol, vol. 2 #21
Advertisement:

In 1963, DC Comics published a book with a new kind of superhero team: the Doom Patrol. They were loners, misfits, mistrusted by the public, and led by a genius in a wheelchair. Despite obvious similarities, this team came out several months before X-Men was published by the marvelous competition, which has led to unproven accusations of plagiarism. The series was written by Arnold Drake (with an assist on the first issue by Bob Haney) and penciled almost entirely by Bruno Premiani. The Patrol first appeared in My Greatest Adventure #80 (June 1963) and continued appearing in subsequent issues. With #86 (March 1964), the book was renamed after the team. While the X-Men eventually flourished in the 1970s, initial sales of Doom Patrol died down and the original series ended quickly when Drake decided to go out with a bang and kill them all off. The last issue was numbered #121 (September-October, 1968).

It didn't quite stick. Over a decade later, the team was relaunched, with all new characters reminiscent of the older ones... and it turned out Robotman survived because he was everyone's favorite anyway. The second version of the Patrol appeared in Showcase #94-96 (August-December, 1977), written by Paul Kupperberg. Sales were not good enough to get them a new title, but they went on to become regulars of the DC universe, receiving guest appearances in Kupperberg-written titles featuring Supergirl, the Teen Titans, and Superman.

Doom Patrol vol. 2 was launched in October 1987, still written by Kupperberg. Eventually, most of the original team was revealed to have been resurrected in some way or alive all along, and the new book added several other characters who colored within the superhero lines and didn't quite set the world on fire. Then came Grant Morrison, who dedicated them more specifically to fighting "weird" crime and disasters. Their first Story Arc, "Crawling from the Wreckage", built up the weirdness of the comic to extremes and delved into some adult subject matter. There were scissored from imaginary worlds, the Brotherhood of Dada, the Men from N.O.W.H.E.R.E, and a friendly transgender street named, well... Danny the Street. Just in case you were wondering, he dresses like a boulevard. No, really. And then it got even weirder. Morrison left and, with the switchover of the book to Vertigo Comics, Rachel Pollack, more well known as a tarot expert and prose fiction writer, took over. She had much the same approach, but the book did not retain its popularity and it got canceled. The title ended with issue #87 (February 1995).

Since then there have been a few subsequent revivals. John Arcudi wrote a series for twenty-two issues - the first few issues seemed like a typical "corporate superhero" reboot but this was a fake-out, and they rapidly got entangled in more typically "Doom Patrol" schemes involving characters from the previous series, corporate manipulation, a soul-stealing demon, and Chinese sorcerer spirits. Unfortunately, due to the fake-out opening issues, the series shed regular readers and was eventually canceled. John Byrne did a Continuity Reboot that was straight superhero fare - ill-fated to begin with and downright ignored by other DC books of the time. It eventually ended with the Crisis Crossover Infinite Crisis, which undid most of Byrne's changes and restored the team's history. Byrne did finally manage to bring the original member (the only one who had yet to return) Elasti-Girl Back from the Dead, though. After an appearance in the Teen Titans comic and Animated Series, their popularity resurged enough for them to get their new series in 2009, written by Keith Giffen (of JLI fame) who was practically begging for the position. This time, the original team was employed as a policing force of sorts on Oolong Island, the haven for mad scientists from 52, and Giffen made it clear that (in typically weird Doom Patrol fashion) everything had happened to them. Even the contradictory stuff. It came to an end with Flashpoint and the subsequent New 52 relaunch.

As part of Gerard Way's Young Animal imprint at DC, a new ongoing title launched as the imprint's flagship book, written by Way himself. It also became apparent that, despite the major reboot a few years earlier, the Patrol's history was still intact, with Way's run picking up from elements of Giffen's.

The Doom Patrol featured prominently in the final season premiere of Teen Titans, since Titans member Beast Boy was a Doom Patrol alumnus, while the Brotherhood of Evil would become the antagonists for the rest of the season. The team got A Day in the Limelight in Batman: The Brave and the Bold, fighting Animal-Vegetable-Mineral Man and General Zahl. They also got their series of shorts on DC Nation which are almost verbatim adaptations of some of Drake's earliest stories.

A live-action series based on the Doom Patrol premiered on DC Universe in 2019, as a spinoff of Titansnote Though they then declared the two shows take place in separate, but almost identical, continuities. One where the Chief is Demián Bichir, one where he's Timothy Dalton. For anyone other than the Doom Patrol, that would be weird. This version of the team features a classic lineup of Caulder, Robotman, Negative Man, and Elasi-Woman, but is primarily influenced by Morrison's run of the comic.