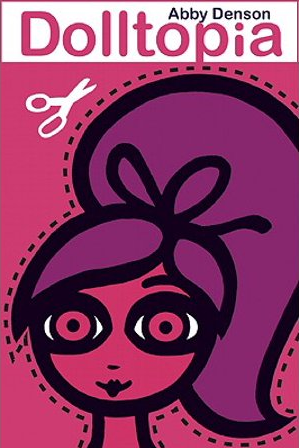 Dolltopia is a Comic Book created by Abby Denson.

Kitty is a doll who has become fed up with her life as a toy for some little girl to play with. She doesn't get to live her own life, make her own decisions, or have her own dreams. All that is dictated by the little girl who owns her. One night, she decides to leave it all behind. Once she escapes the room, she meets Army Jim, a military action figure who's heading for Dolltopia, a secret society dollkind has built separate from humanity, where dolls can be who THEY choose to be.

Once their, they settle right in, deciding their own fashions, lives, and even getting surgery from the local doctor, allowing Kitty to actually move and articulate her limbs.

From there, Kitty joins other dolls on a raid at a local doll factory, welcoming new dolls (one that Kitty even knows from her old life), and helping with what to do when Dolltopia comes under threat of discovery by humans.