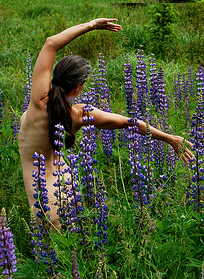 The Nude Nature Dance is Exactly What It Says on the Tin: a dance done in the nude in open fields or a forest clearing to show characters share a bond with nature. It is frequently used for fanservice, but may be played for squick, if, for example, the participants include Hippie Parents.

The dance will generally be used to show that the characters are innocent, blithe, free spirits, or that they are In Harmony with Nature in a deeply spiritual or religious way. It may be celebratory, with the connection to Mother Nature signified by the fact that the characters are au naturel. It may also be a sign of a primitive, animistic religion, and can be a prelude to a Green Aesop, or, at the other extreme, to blood sacrifice.

Note that most straight versions of this trope leave out the brambles, thorns, small rocks, stinging insects, mosquitoes, ticks, and various other annoyances to be found in Real Life natural settings, which make going nude or merely barefoot in a forest not as good of an idea as it may sound.

Participants may be Granola Girls, New Age Retro Hippies, Hot Witches, young children or Magical Forest Dwellers and literal tree-hugging may be involved. Compare Earthy Barefoot Character, whose feet may be naked for all the same reasons.