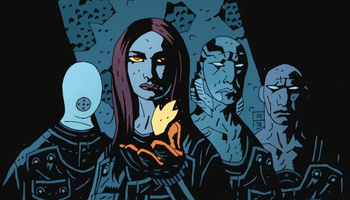 A spinoff series of comics set in the Hellboy universe, which picks up after Hellboy leaves the titular Bureau for Paranormal Research and Defense.

The first series (retroactively dubbed BPRD: Plague of Frogs) follows the remaining agents as they continue trying to prevent The End of the World as We Know It, fighting the rapidly multiplying frog monsters and confronting several particularly nasty villains. Long story short… it doesn't work. The second series, titled Hell on Earth, follows the bureau trying to save what remains of civilization and kill the Eldritch Abominations rampaging across the planet…with limited success at best. And by the third series, The Devil You Know… well, who knows what's going to happen anymore?

The book was scripted by John Arcudi from 2003 to 2015, from plots co-written by Mike Mignola and himself. It was at first illustrated by Guy Davis, whose artwork set a very different tone from the original series. Davis left in 2011 and was replaced by a number of artists, Tyler Crook and James Harren being the most prevalent.