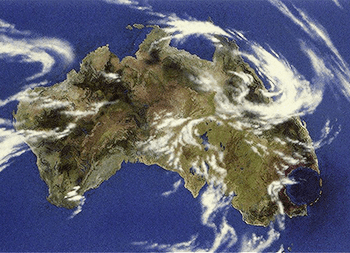 There was a city here. It's gone now.
"Gentlemen, we may not make history tomorrow, but we shall certainly change the geography."
— General Sir Charles Harington before the mine detonation at the Battle of Messines

Maybe it's a volcano, an earthquake, some object from outer space, a Person of Mass Destruction, a nuclear war, etc. Or maybe it's an intentional method of Terraforming. In fiction, many events have a tendency to alter the local geography. Better get to redrawing those maps.

Often also a form of Artistic License – Geology. See also California Collapse for one variation of disasters. This isn't meant to be confused with the long-standing geographical differences that might be present on an alternate Earth. Also overlaps with Terrain Sculpting. Victims of this are often throwaway countries.

This has nothing to do with changing borders between countries. For a more egotistical redecoration of Earth's nearest neighbor, see Deface of the Moon. For a magical variation, see World Sundering.