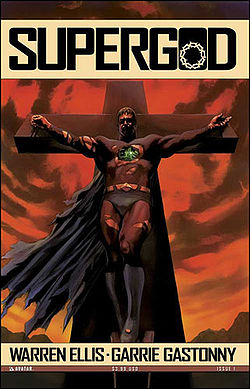 His initials are J.C., and here you see him on the cross. note Don't trust him, or any other weaponized deity. The man in the sky is not coming to save you.
Advertisement:

Imagine if the world's nations started an entirely different arms race. One where they strove to create the most powerful superhuman, either to solve some problem plaguing the nation or, more obviously, as a weapon. This is the world of Supergod.

Created by Warren Ellis, this is his third miniseries for Avatar Press that deals with superhumans. Black Summer had superhumans who were too human, and No Hero's superhumans were inhumane. In Supergod, the superhumans just aren't human at all anymore. They don't see the world the same way you do. Their thinking and morality is claimed to be on an entirely alien level, and their ways of solving problems are truly monstrous.

Or at least that's what the drunken, drug-addled, guilt-ridden, Unreliable Narrator keeps telling us.

No connection to the album in which “Caramelldansen” debuted.