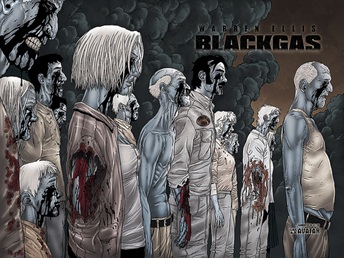 Tyler's brought his girlfriend Soo back to his hometown of Footstep, a footnote of a town located on scenic Smoky Island. The first night they're there, Tyler and Soo go up to his parents' cabin in the middle of the nearby woods for some alone time.

Because they're the only people on the far side of the island, they're thus the only ones on the island who are unaffected when the Bulge, a local inactive volcano, belches out a toxic cloud of gas.

The gas, when inhaled, rapidly suppresses a human's rationality, leaving a crazed cannibal who's constantly weeping black tears. Every impulse is immediately acted upon, and Smoky Island begins to devour itself. Tyler and Soo, neither of whom are in the least prepared for any kind of survival scenario, are forced to fight their way through the town to find a way off of Smoky Island.

Despite the similar concept, Black Gas predates Crossed by three years or so, and the similarly afflicted "Droolers" from David Wellington's Plague Zone by a year.